The main tab lets you select the projects whose code will be loaded and executed. There is also provision for defining one’s own initialization by providing a function and arguments to be called. Please note that this function is meant for system initialization and works just like sending -s mod fun arg on the command line and that io:format calls from it will not get displayed in the console. The latter is because we start a remote shell, different from the “normal” shell associated with stdout.

The runtimes tab lets you define the runtime that will be used and the node’s name and cookie. The cookie is optional, defaulting to the user’s default cookie.

An important note is that if you use long names and a node that is started externally, then the name in the dialog should not include the host name. This implies we can’t connect to remote nodes on other machines, it is a known problem (ticket).

For a debug launch config, the debug tab contains the related options. The one that is erlide specific is the list of interpreted modules. The selected modules will be interpreted alongside with any module (from the referenced projects) that contains an enabled breakpoint. A similar list is available in the Interpreted modules view, allowing to change the status of the modules while debugging. 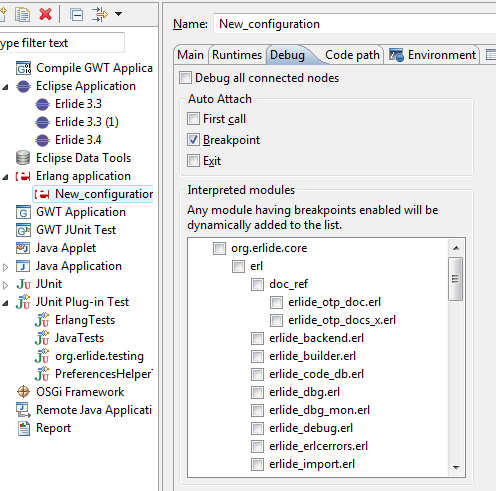 While in the debugger, you can do most of the things that are expected while debugging: set breakpoints, execute code one line at the time, viewing local variables and even modifying them. Until a more detailed documentation of the debugger will be written, here come a couple of pictures showing a line of code executed with a changed variable. Before: 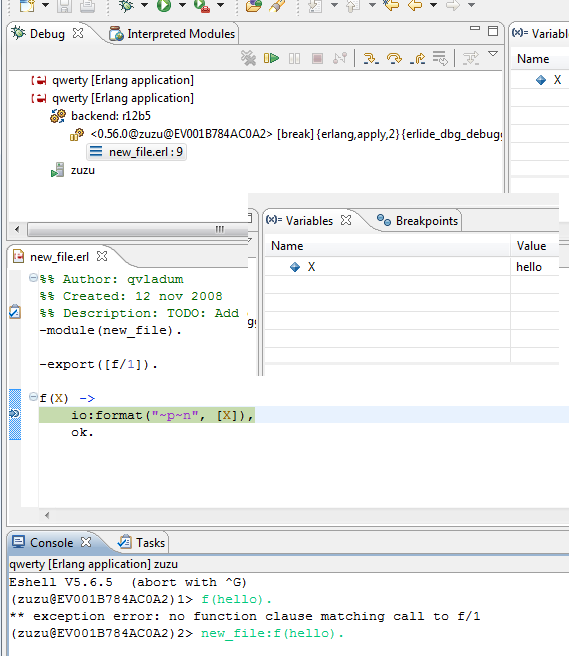 Did you find errors in the documentation? Do you have improvements to suggest? Suggest edits!